DFS Sites
Updated on May 7th, 2019 by Brad Perniciaro

If you dabble in DFS but hate pouring through stats and building lineups, prop fantasy games might be the answer.  Monkey Knife Fight is a new site that satisfies your weekend wagering fix without the considerable time investment of daily fantasy sports .

In this Monkey Knife Fight Review, I detail how their unique prop games differ from the analytics-heavy contests in your typical daily fantasy site.  I'll also reveal how you can leverage their framework to win as much as 14 times your contest entry fee.

Monkey Knife Fight offers a variety of contests that allow you to make predictions about specific players. The more predictions you bundle together (think parlays), the more money you win if they are all correct.

Monkey Knife Fight is a dead-simple alternative to DFS sites that require a significant amount of research to be competitive.  Instead of competing against other players, you're playing against the house. Just make two or more correct projections, and you're a winner.

Because all of their games involve prop games, it's quick and easy to get in on the action.

Earn $25 by getting your friends to sign up and compete in free games.

There is no dedicated app, but the mobile version of the site is excellent.

Sometimes I don’t have the time to play daily fantasy sports effectively.  And as anyone who has dabbled in DFS lately knows, competing can be costly if you don't know what you're doing.

It takes a significant amount of research time to consistently create winning lineups on sites like Fantasy Draft or Yahoo Daily Fantasy.  And you have to stay on top of your lineups all the way to roster locks if you want to have a chance to generate a positive cash-flow.

It's a significant time investment.

The great thing about Monkey Knife Fight is that the types of games are very straightforward. Because you’re competing in basic prop games like over/under, there isn’t much research required. 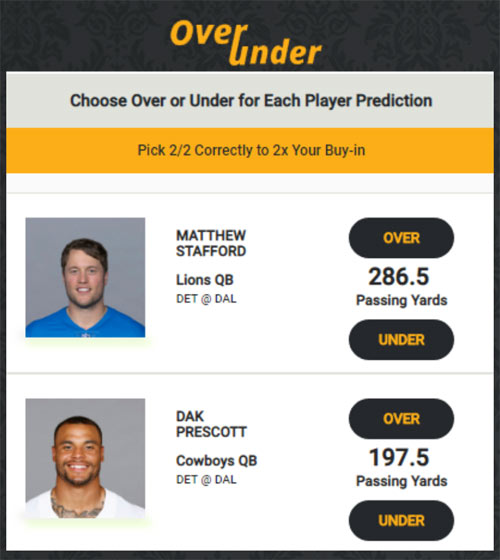 Monkey Knife Fight Over Under Game

Just pick a sport you frequently follow, evaluate the game options, and you’ll be playing prop games in seconds.

Picking a game and a contest is intuitive

I am a huge NHL fan and have a pretty good knowledge of hockey players, teams, and match-ups.  So I jump on Monkey Knife Fight and choose one of tonight's games.

From there, I select from a variety of contests for that specific game.  Different contests require that you make a different number of projections to win.

Playing games can be as simple as picking the over/under on a game to predicting individual stats like goals or shots. 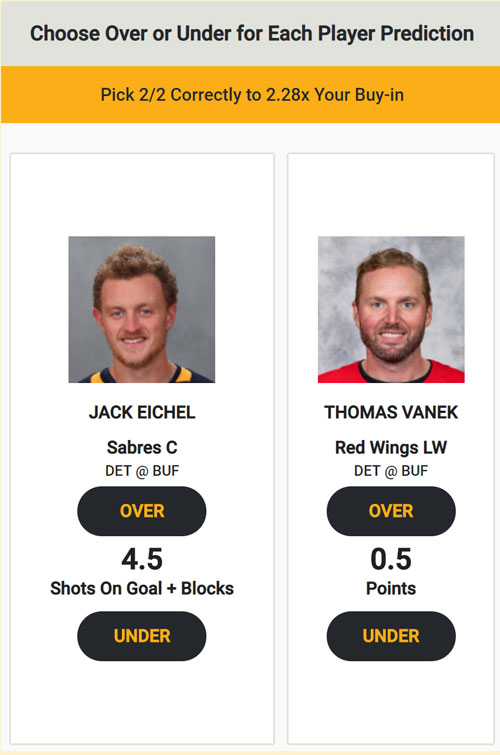 How MKF games are different from traditional DFS contests

In most Monkey Knife Fight games, you are predicting the performance of specific players. You don't need to be concerned with how his team will do.

Rather, you only need to focus on how he will perform in one specific statistical category.  Everything is simplified.

At the time I'm writing this Monkey Knife Fight review, they're running a promotion ​to match your initial deposit up to $100 when you use the prom​o​ code: CSWR.

Currently, the only other DFS site that is offering a deposit match (a 110% bonus to be exact) is FanPicks.  I wrote a FanPicks review that evaluates that daily fantasy site in detail.  Check it out if you're interested specifically in college sports contests.

Like most fantasy contest sites, you will earn the deposit match over time as you play more games.

Who can and can't enter contests on Monkey Knife Fight

You must be at least 18 years old to play at Monkey Knife Fight. You must also live in one of the approved states and be able to provide proof of residency.

Getting started at Monkey Knife Fight

Let's look at what it takes to get into the action at Monkey Knife Fight.  In the next few sections, I'll walk you through the process of entering your first game.

Make a deposit using a debit or credit card

When you are ready to start entering paid games, you need to add funds to your account. Monkey Knife Fight lets you make deposits using either a credit or debit card.

Don't forget to claim your signup bonus by using the coupon code: CSWR.

Click on the "New Game" button in the left sidebar, and you'll see a lists of all the games available for that day.  Once you choose a sport and game, select your contest and make your predictions.

The amount you can win depends on the sport and contest type.  For example, in a typical NBA game you can earn anywhere from 2 to 14 times your entry fee.

Winning 14 times my contest fee sounds good, so what is the catch?

To double your money, you have to make two correct prop predictions (for instance, over/under picks).  But as you might expect, the more massive payouts require that you correctly predict a more significant number of outcomes.

For instance, you want to win fourteen times your money you'll need to be correct on your over/under choices for five players.

Below you can see the sample payouts for a typical five-team parlay in sports wagering.  Whereas the odds for a standard parlay are 25-1, MKF pays 16-1.

Keep track of all your games in the dashboard

The Monkey Knife Fight Dashboard keep track of all your games. It shows upcoming, live, and completed contests.

Show me the money

Since we all assume we're going to win a ton of money, we'll want our winnings in a timely fashion.  As such, it usually takes 1-3 days to process a withdrawal request.

Monkey Knife Fight issues payments either via paper checks or e-checks delivered via email. The smallest withdrawal amount allowed is $20.

Monkey Knife Fight offers a way to get your friends involved.  Simply enter a game and specify your friend's email address to invite them to a free $10 game.

When your friend registers, they will get the same promotional deposit match that you did. And when they do sign up, you get a $25 referral fee!

Claim Match Bonus!
About the author